In 1989, students and workers around China demanded greater freedom. Many demonstrations were held around the country but the biggest one occurred in Tiananmen Square.  After weeks of protests, the Chinese government grew impatient and brutally suppressed the demonstrators.

China has changed enormously since 1989.  It abandoned its inefficient economic system in favor of capitalism and now enjoys a growth rate that is the envy of the world.  Unfortunately, political change has been slow and China remains a one party state.  Basic freedoms of speech and assembly are restricted.  The Internet and media are censored and citizens are imprisoned without due process. 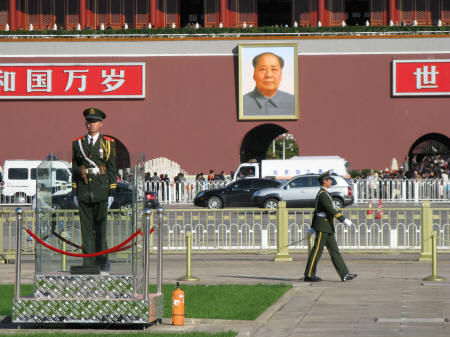 The legacy of the 1989 Tiananmen protest is still visible in Tiananmen square.  Tourists will notice a high level of police presence, airport-like entry controls and many surveillance cameras.

The PBS Frontline documentary called the "Tank Man" provides an excellent account of the Tiananmen uprising and the impact it had on China and the entire world.  It is recommended viewing for all visitors to China.